After a gap of four (4!) years, 101 Films have released another ‘Extra’. Now the dust has settled, Lewis and Ian take a look at Star Wars: The Last Jedi. Is it good? Is it? IS IT? Yeah, sort of.

A reader recommendation this week – Seven Samurai from Japanese director Akira Kurosawa. What a treat it was!

Hello again, long time no see. Here we are with a tribute to the late, great Gene Wilder, with a look at The Producers. Now GIVE ME MY BLUE BLANKET.

This week we have another slightly crackly Skype podcast in which we discuss reader recommendation The Warriors and get all carried away with making up gang costumes.

In a belated Halloween podcast, we review the classic Hammer film Quatermass and the Pit. Apologies for the poor sound quality, this is our first attempt to record over Skype!

To tie in with the World Cup, sort of, we review the brilliant Brazil. After being disappointed by The Fisher King and Twelve Monkeys, Ian finally gets why Terry Gilliam is held in such high regard. 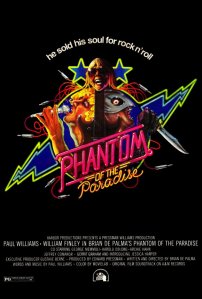 One of the best things about doing the podcast is being encouraged to watch films that we (well I) would otherwise never bother with. Case in point; our film this week is Phantom of the Paradise

. If listener Zvonimir hadn’t recommended it would Lewis and I really have sat down to watch a 1970s rock opera? Well, we did watch Zardoz, so you never know.

A bizarre mixture of The Phantom of the Opera, Faust and A Picture of Dorian Grey, Phantom tells the story of unlucky Winslow Leach who becomes the titular Phantom after having his music stolen by the all powerful music producer and Ronnie Corbett look-alike Swan.

For the first quarter of the film Lewis and I really didn’t know what to make of Phantom. Was it serious? Was it supposed to be a comedy? What on Earth was going on? It was the introduction of the character Beef, played by Gerrit Graham, where the film started to work for us. He’s ridiculous, over the top, amusing but very watchable, just like Phantom itself.

Lewis and I were taken by the Phantom’s odd charm. It has great performances from William Finley as Leach and Paul Williams as the diabolical Swan and a very catchy soundtrack also from Paul Williams.  Like us, you might find it a little off putting to begin with, but stick with it and I’m sure you’ll enjoy it. Beef has to be seen to be believed…

If our review has piqued your interest in the film, you can buy the Blu-ray from Amazon by clicking here

. We get a little bit of cash if you do – thanks in advance!

A cult classic for our 72nd film; Phantom of the Paradise. Lewis and Ian were charmed by it’s sheer joie de vivre. And BEEF.

In celebration of Valentine’s Day we go all luvvy duvvy with Truly Madly Deeply – or ‘Ghost for grown-ups’ as Roger Ebert described it. It’s got Alan Rickman in it, what more recommendation do you need?