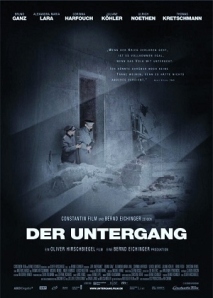 It was a tricky old podcast this week. How do you talk about the horrific final days of Hitler’s Germany without being too depressing, but equally without being too lighthearted? We do our best to walk the line, but inevitably this week’s podcast has a slightly more sombre feel to it than usual, along with a bit of maudlin philosophizing chucked in at the end for good measure.

Downfall is an astonishing film. It’s not an easy watch in places, but it’s easily one of the most powerful and moving films we’ve ever seen. At times it verges on the bizarre, and you almost have to remind yourself that these events actually did happen: yes, they really did have a party as the Soviet shells were falling, and yes, they really did recruit children to destroy tanks. Watching those final, desperate days of the crumbling Nazi regime really does feel like a descent into madness and hell.

Bruno Ganz turns in the performance of a lifetime as Hitler, and passed a milestone as the first German-speaking actor to depict Hitler since WW2. At times his Hitler is almost pitiable as he stares silently at the portrait of Frederick the Great, looking for inspiration, but he quickly reminds you of his mania and hate when he launches into one of his many incoherent rages. It can’t have been an easy task playing one of history’s greatest villains, but Ganz pulls it off admirably.

As I said, Downfall isn’t an easy watch in places, but it’s an absolute must-see: if you haven’t watched it already, get it right now.

Anyway, we hope you enjoy the podcast – listen out for a truly epic trivia quiz this week, in which Lewis reveals his ignorance of YouTube and Prussian generals. The idiot!

We’d love to hear your own film recommendations – please get in touch at 101filmsyoushouldhaveseen@gmail.com or leave a comment on the blog. Feel free to also to say nice things about us on iTunes!

One thought on “Yeah? What do you expect from a teetotal, non-smoking vegetarian?”