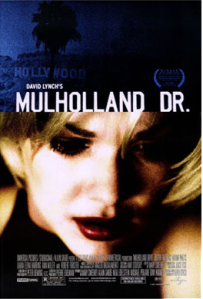 This week we tackle David Lynch’s Mulholland Drive, another reader recommendation (we’ve given up on calling you all ‘listeners’, there’s just such an alliterative appeal about ‘reader recommendation’). Importantly, this gives us a chance to wheel out our ‘news’ jingle, which we always look forward to, so please do write in so we can use it every week.

Our knowledge of David Lynch is fairly limited – we’ve never seen Twin Peaks or Blue Velvet and we spent most of last week thinking that he’d directed eXistenZ  (turns out that was David Cronenberg, so we were right on half of the name at least) – therefore we weren’t quite sure what to expect of Mulholland Drive. Turns out it’s completely madballs, but in a good way.

It’s one of those films that really shouldn’t work if you look at it on paper. Characters are introduced and then quickly forgotten about, whole strands of plot seem to go absolutely nowhere, it cuts between apparently random scenes that seemingly have no connection, and towards the beginning the acting is uncomfortably forced and wooden (although as you watch more of the film, it becomes clear that this is intentional). The final resolution, when it eventually arrives after two and a half hours, offers no resolution at all, and if anything simply creates more questions.

But despite all of this, or perhaps because of it, it’s utterly compelling.

For a start it’s beautifully shot, and Lynch regularly chucks in scenes and images that stay with you long after the credits roll: the mysterious man in a wheelchair with a tiny head, the terrifying monster thing that lives behind the bins at Winkie’s, the insane cabaret acts at Club Silencio, Billy Ray Cyrus being punched in the face – all of these things will be lodged in my memory for years to come I’m sure. Then there’s the amazing sound effects and music that are so intertwined with the imagery that it’s impossible to separate the two. I will never see a laughing elderly couple again without involuntarily imagining an evil rumble that could well have reverberated out of the very pits of hell itself. This could make family reunions difficult.

And then there’s the central mystery itself. What’s the blue key for? What’s the relationship between the end of the film and the beginning? Is it a dream? If so, who’s dreaming? It’s a mystery that only Lynch knows the answer to – if there is an answer – but as we mention in the podcast, the joy of the film is in making up your own theories about what happened.

So thanks again to Claire for the recommendation, and without further ado, here’s our feature presentation:

We’d love to hear your own film recommendations – please get in touch at 101filmsyoushouldhaveseen@gmail.com or leave a comment on the blog. Oh, and by the way, we checked: Billy Ray Cyrus isn’t dead, turns out he had quite a famous daughter. Who knew?

13 thoughts on “Rejoicing in the madness of Mulholland Drive”