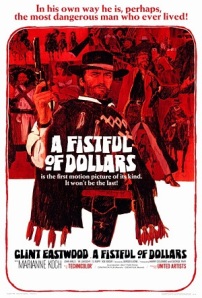 I’ve never really been into Westerns. My opinion of them mostly derives from watching Bonanza on a Sunday morning as a kid and wishing fervently that there was something better on TV, like Dungeons and Dragons or Spider-Man. I don’t think I’ve ever seen a full-length Western (Blazing Saddles doesn’t count, despite Ian’s protestations). Therefore, when Ian recommended A Fistful Of Dollars

, my expectations were set suitably low.

For a start, Clint Eastwood is possibly the coolest man alive. As the trailer enthusiastically says: “Danger fits him like a tight black glove. He is perhaps the most dangerous man who ever lived.” Did you hear that? Like a tight black glove. He doesn’t even wear gloves, but if he did they’d be tight and black and full of danger. And he’d probably kill you for just looking at them.

One of the things that surprised me about the film is just how violent it is. I lost count of how many people died by gunshot or immolation – it really emphasises that life is cheap in the Old West. The other thing that surprised me is the character of the Man With No Name himself. I assumed he’d be a good guy, the kind who rides into town to clean up the bad guys, but in fact, he’s a lot more morally ambiguous than that. He’s really only in it for the money, and he’s happy to play the bad guys off each other in order to make a buck, regardless of the body count. As Ian said, he’s not the good guy, he’s just slightly less bad than the bad guys. Nothing is black and white in this film, which is what makes it interesting – you’re not sure where it will go next.

All in all, it’s a fantastic film, and it comes highly recommended from the both of us. Now I’m off to watch For A Few Dollars More.

Last but not least, our Secret Sponsor for this week is Bobby Joe Warren (@bobbyjwarren). Check out his movie blog at http://bobbyjoesmovieblog.blogspot.co.uk/, particularly his article about ‘The Tingler‘.

If our review has piqued your interest in the film, you can buy the A Fistful of Dollars DVD from Amazon by clicking here

5 thoughts on “Get three coffins ready…”