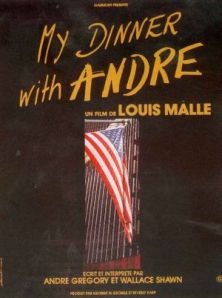 I’d never heard of My Dinner With Andre

until a few weeks ago but, in the manner of these things, once I’d heard about it I saw references to it everywhere. Ian first mentioned it to me after seeing an episode of the US comedy Community that parodies the film, and in the same week my co-blogger Sir Gaulian at A Most Agreeable Pastime wrote a post about it. Then I found out the film has been referenced in The Simpsons and Frasier (“My Coffee With Niles“), and Wallace Shawn even reprised his performance (sort of) in the Woody Allen film Melinda and Melinda.

So what is this great film that everyone’s referencing? Well it’s pretty much exactly as the title suggests: Andre Gregory and Wallace Shawn have dinner together and talk. And that’s it. The film is bookended by shots of Wallace making his way to and from the restaurant, but otherwise the film is composed of two men talking and masticating. It may not sound terribly exciting – and to be honest it isn’t – but it IS endlessly fascinating.

Andre in particularly has an almost hypnotic way of talking that draws you in and makes you hang on every word. This is helped by the fact that he keeps coming out with some bizarre anecdotes that almost seem to have no form or meaning and head off in completely unexpected directions. “And then” is probably the most used phrase in the film, immediately followed by something deliciously obtuse:

…and then I threw the teddy bear to him, and he gave it suck at his breast, and then the teddy bear was thrown up into the air again, at which there was another explosion of form into…something, something like a kaleidoscope, like a human kaleidoscope…

…and then naked, again blindfolded, I was run through these forests, and we came to a kind of tent made of sheets, with sheets on the ground, and there were all these naked bodies huddling together for warmth against the cold…

…and then, the stretcher was lowered into the grave, and then this wood was put on me, and then my valuables were put on me in my hands…

Fascinatingly, all of these stories are mostly autobiographical, being drawn from Andre’s own travels after ‘dropping out’ of theatre and spending five years cultivating various life experiences. The seventies eh? Crazy times.

Later on these anecdotes evolve into a discussion about the nature of modern life, which is just as fascinating as the weird stories that proceed it. There’s a great bit where Andre rails against electric blankets because they insulate you against all feeling and hence a connection with the world, whereas Wallace, ever the pragmatist, defends his electric blanket by helplessly pointing out that it gets very cold at night in New York.

All in all it’s a great film, and it surprised me just how well a simple conversation can work on screen – all you need is something interesting to say.

Last but not least, our Secret Sponsor for this week is Tim and Pat’s Podcast (@timandpatspod).

If our review has piqued your interest in the film, you can buy the My Dinner With Andre DVD from Amazon by clicking here

(and we get a little bit of cash if you do – thanks in advance). Although seeing as the film is now freely available on YouTube thanks to Troma, you may as well just click on the video at the bottom of this post and watch it now!