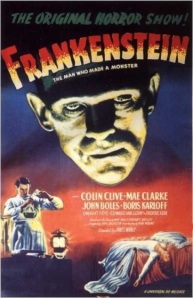 and its (superior) 1935 sequel, Bride of Frankenstein

. As it’s Halloween, this week we’re recording in Ian’s ‘special dungeon’, or as he prefers to call it, his ‘sex attic’. We can assure you that any screaming you can hear in the background is merely a sound effect and should be ignored.

It was a real pleasure to delve into these classic films from the 1930s: I hadn’t seen either film before, although Ian had seen Frankenstein, but we both agreed that Bride was by far the superior of the two. Frankenstein does a good job of setting up the character of the monster, but it’s achingly slow, and packed with seemingly endless dialogue that never really leads anywhere. However, Boris Karloff well deserves the praise he received for his performance of the monster, which has since become cemented into popular consciousness: both helpless and horrific, Karloff’s monster is equally chilling and pitiable. Overall though the film was a difficult watch – both of us stole surreptitious glances at the clock numerous times while the DVD was playing – but it’s saved by a few iconic scenes, notably the “It’s Alive!” sequence.

Bride of Frankenstein, on the other hand, was a rip-roaring ride from start to finish. Despite being made only four years after Frankenstein, it feels like a world away from its prequel. For a start, the pacing is much, MUCH quicker, and the film manages to pack quite a convoluted story into its relatively short running time, with plenty of action scenes thrown in too. The monster also gets a bit more character development, including gaining the ability to speak – charmingly, some of the first words he learns are “SMOKE!” and “DRINK!”, sort of like a horrific Father Jack. And speaking of comedy, we were enchanted by the bizarre, almost music hall performance of Una O’Connor as Minnie, which relied heavily on high-pitched streaks and lines like “Burnin’s too good fer ’em!” Was she the inspiration for Monty Python’s gangs of old ladies? Who knows.

If our Halloween special has piqued your interest in the films, you can buy the Frankenstein

or Bride of Frankenstein

box set) from Amazon by clicking on the links (and we get a little bit of cash if you do – thanks in advance).